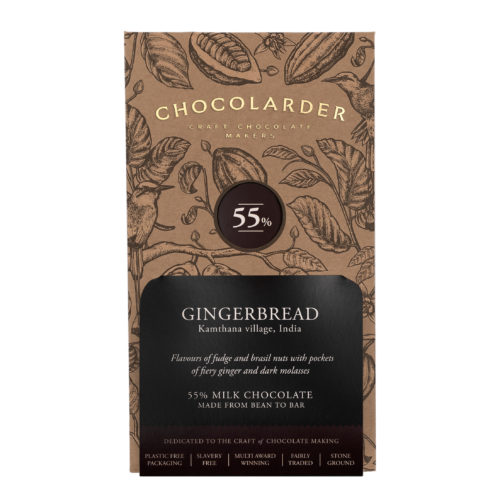 Farming in Kamthana, India is incredibly diverse, as a wide variety of produce is grown simultaneously intermixed across the land, leading to this incredible ginger.

The fiery flavour of the ginger, baked into this traditional recipe gingerbread cuts through our fudgy Oko Caribe farm milk chocolate with its warming hum.

Opening the packet hits you with the smell of freshly baked gingerbread, The bar opens with flavours of fudge and brazilnut with crunchy pockets of fiery ginger and dark molasses.

It is believed that the first gingerbread recipe originated in Greece in around 2400 BC. From there, Chinese recipes were developed in the 10th century and by the late middle ages, Europeans had their own version of the biscuit. The hard cookies, sometimes gilded with gold leaf and shaped like animals, kings and queens, were a staple at Medieval fairs in England, France, Holland and Germany. Now, in the 21st century, here is our own grown up take on Gingerbread, made exclusively in house, using exceptional ginger sourced from Kamthana village, India.

Disclaimer: No gingerbread men were injured in the making of this bar……. apart from the hundreds that were pulverised.