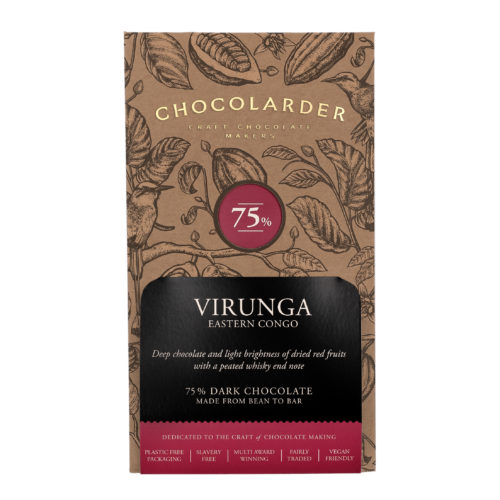 African chocolate has a dark history. That is why projects in the Virunga National Park, the oldest in Africa, are so important. In 2016 the Femmes de Virunga project was launched, the first ever female-led cacao cooperative in the world, and in one of the most dangerous places to be a woman. The project educates and supports these women, enabling them to provide for and support their families.
Since the project started in 2016 more than a quarter of a million cacao trees have been planted and there are over 1500 women farmers in the cooperative.

The Virunga National Park is the largest in Africa, and home to the last of the mountain gorillas. In recent years after two wars and millions of people being displaced from their homes, many have settled at the edge of the park in the search for safety. This has in turn led to deforestation. There are various projects supporting the local people to work in harmony with the rainforest, with one being growing cocoa beans.