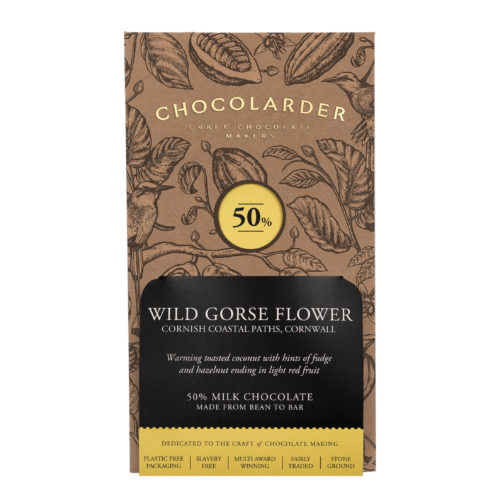 Picked by hand in late spring from the prickly hedgerows that line the rugged Cornish coastal path, these small yellow flowers are a right pain in the fingers to harvest!

However, once steeped in cocoa butter pressed from our own beans, the flowers impart their heady warm coconut scent to our milk chocolate for a unique flavour that makes it all worthwhile.

Gorse bushes can be seen in abundance across the Cornish landscape from moorland to coastal paths, through towns and invading gardens. These large spiney bushes provides shelter and food for many insects and birds, such as Stonechats, Dartford Warblers, and Yellowhammers.The flowers on these prickly bushes are a vibrant yellow and bloom in the years early sunshine, these are the treasures we seek for our chocolate.

During their bloom, clouds of warm coconut scent drift on the breeze from the gorse bushes and are integral to our nostalgia for the long unmitigated summers of childhood that everyone seems to remember but no-one can quantify.

Traditionally, Gorse has had many roles aside its burst of coconut fragrance as we trek the coastal paths. The dry branches can be gathered for an effective fuel, used in bread ovens and stoves, and when bound together could form an efficient chimney brush. The flowers have also been widely used in making wine and cordial but most surprisingly being turned into colourings to decorate Easter eggs.