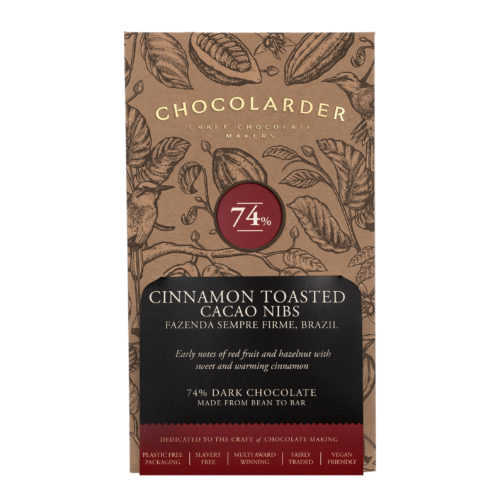 ‘Nibs’ are simply pieces of cocoa bean with the shell and husk removed. The beans used for the nibs in this bar are a native variant from the Akesson owned Fazenda Sempre Firme plantation in Bahia, eastern Brazil.

The nibs are lightly caramelised to preserve their flavour and texture when folded into our Peruvian 70% chocolate, delivering intense bursts of complex cacao flavour through every bite.

Early notes of red fruit and hazelnut with a hum of toasted cacao nibs. Lingering caramel and earthy cocoa flavours finally give way to a final warming glow of cinnamon.

Mata Atlantica is the name given to the extensive rainforest which once stretched along most of Brazil’s Atlantic coast. Sadly there is little left now, but what remains is sustained in part by the cacao plantations nestled in the undergrowth. Fazenda Sempre Firme is a small cocoa plantation, just over a square kilometre in size, right in the middle of the Mata Atlantica.

Owned by the renowned Akessons family, they grow the traditional and extraordinary “Parasinho” variety of cacao that earned the Bahia region notoriety for its quality and fine flavour crop.

To accentuate the beans natural woody and earth notes, the nibs are toasted with Sri Lankan Ceylon cinnamon infusing the nibs with its rich aroma, before the toasted nibs are sealed within a cinnamon sugar crust.