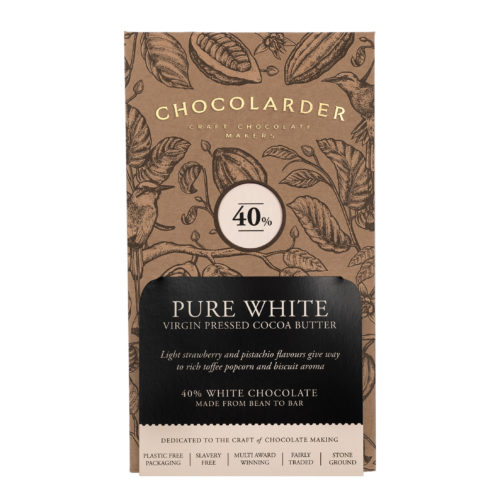 True bean-to-bar craft white chocolate is currently a rarity, so we decided to produce a grown-up version treated with the same care as all of our chocolate.

We fashioned a press to laboriously extract the cocoa butter ourselves from the very beans that we so carefully source and roast, to produce white chocolate that carries the natural flavours of the bean with none of the usual masking vanilla. Making it pure, if not actually very white

A whole cocoa bean contains around 50% cocoa butter, which has a melting point just below human body temperature and is the reason that chocolate deliciously melts in the mouth. Chocolate that is made from the whole bean, ie. bean-to-bar rather than a reconstitution of cocoa powder and cocoa butter, will always have this fat content as it is naturally present in the bean.

White chocolate is often denigrated as not ‘real’ chocolate due to the absence of cocoa solids. Given that cocoa butter makes up more than half of a cocoa bean, we say this is up for debate. White chocolate is usually a confection of cocoa butter used as a vehicle for sugar, milk powder and vanilla, which has little to recommend it. As with all chocolate, however, there is a world of difference between the commodity product and the bean-to-bar craft approach.

By pressing fine flavour cocoa beans ourselves, we extract virgin fine flavour cocoa butter which needs just as little interference as the rest of our chocolate to produce a craft white chocolate worthy of the name. The reason we call it pure is that we don’t mess around with it, evidenced by its unrefined, natural appearance.